Our experts will reply you very soon.

Click Here to Chat Arihant Solvents and Chemicals
WhatsApp Us 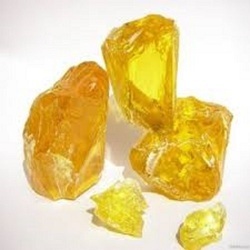 Gum Rosin also known as colophony or rosin and is a natural organic resin that is obtained from plants, mostly pines and other conifers, when the fresh liquid resin obtained from these plants, is heated and the volatile liquid terpene components are vaporised. Gum rosin mostly contains different resin acids, especially abietic acid. Gum Rosin is naturally found in Indonesia, South China and North Vietnam. It is generally semi-transparent or translucent. The Indonesian Gum rosin is yellowish, while generally gum rosins vary in colour, from pale yellow to black. It is a solid and vitreous, is brittle at room temperature and melts at higher temperatures and is insoluble in water and soluble in organic solvents. It also has a faint piny odour

Manufacturing Process
Gum Rosin is produced from the crude pine resin collected from pine trees. The resin is subjected to distillation and the distillation process is carried out in large copper stills. The volatile liquid terpene components separate from the mixture, as it vaporizes at a temperature between 100 to 160C, leaving behind fluid rosin as the distillate. This fluid rosin is collected from below and purified by passing it through straining wadding. The condensate left behind is called turpentine oil.

Rubber Industry
Gum rosin is used in rubber industry as a softening agent. It increases the elasticity of rubber, enabling easy kneading and extrusion. It is also used as an emulsifier in production of various kinds of synthetic rubber like SBR, ABR and chloroperene rubber.

Paper Industry
It is used in the manufacturing of paper for paper sizing, improving the strength of the paper and its smoothness.

Pharmaceutical Industry
Gum Rosin is used for tablet film and enteric coating as it has excellent film forming and coating properties. It is used for formulating microcapsules and nanoparticles. Its esters are used in chewing gums for medicinal applications.

Entertainment Industry
Musicians who use string instruments rub gum rosin on their bow strings for the strings to vibrate clearly. In archery, gum rosin is present in the wax that is applied to the bowstring for maintenance purposes. Ballet dancers, boxers, gymnasts and rock climbers apply gum rosin to the tips and heels of their shoes to reduce slippage.

Other applications
Gum rosin is added to printing inks and as a ingredient in laser printing paper. It is also used in thermoplastic coatings and for sealing wax.